At Keymusic you get the real music experience thanks to our experience stores. Nothing is more fun than trying products out yourself and being able to compare them in our stores.

Just like in all KEYMUSIC branches, in Roeselare there is also a passionate and up-to-date professional team of product specialists available. The power to attract people, which reaches as far as the coast and even North France, has made KEYMUSIC Roeselare the best-known music store in West Flanders since 1996. 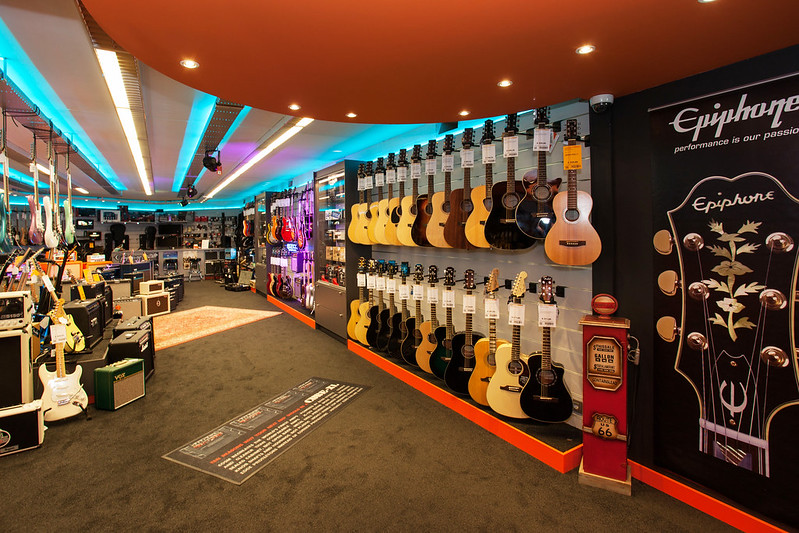 Location of the store
KEYMUSIC Roeselare is located in the Brugsesteenweg - a street with a lot of shops and large shopping centers outside the center of Roeselare, however our store is only 800 meters apart from the Grote Markt. You will recognise the store easily; large panels with the familiar KEYMUSIC-logo make clear from a distance where the place to be for musicians in Roeselare is located.

Selection
In KEYMUSIC Roeselare you will find a relatively large proportion of our complete range of products, spread over an area of 500 square meters. When you enter the shop you will pass the counter, and across from it you can see the brass section. Further on you will find the keys, dj, and studio department where you can test digital pianos as well as keyboards and synthesizers but also dj-gear, microphones and audio interfaces.

If you'd rather not stroll in a straight line through the store, you can always take a left upon entering the store. That way you pay a visit to the P.A. department, followed by the drum and percussion section. Down the store lays the guitar department; a large selection of (semi-)acoustic and electric guitars, and lots of amplifiers occupy the room. A pleasant sight for sure!

Access
Because KEYMUSIC Roeselare is just outside the one-way traffic zone, the store can be reached by car easily. Drivers on the E403 who come from the direction of Bruges, best take the exit Roeselare-Beveren and drive down the R32 until they reach the Brugsesteenweg. People who come from the direction of Kortrijk take the exit Roeselare-Rumbeke and go down the Rijksweg (ring road of Roeselare) into the Hoogleedsesteenweg until they reach the junction with the Brugsesteenweg. KEYMUSIC Roeselare is a ten minute walk from the train station and the Grote Markt.

Pop music in Roeselare
Well-known artists such as Goose, SX and Doctrine are regular customers at KEYMUSIC Roeselare. It is also the second home of metal band Spoil Engine, ánd a considerable part of our customer base loves heavy guitars and music. The team and shop anticipate and respond to those musical interests.

Take a virtual tour and discover this store. We are sure you want to plan a "real world" visit afterwards. Try it today!

2 years extended warranty
14 days money-back
Try Before You Buy
Dealer of all premium brands
No.1 store for musician, producer and dj.

Please complete the form below. We will get in touch with you as soon as possible

Many thanks for your message. You will receive a confirmation of receipt by email.

An error has occurred in sending your message. We are trying to resolve this quickly. Our apologies for the inconvenience

KEYMUSIC uses functional, analytical and marketing cookies to keep our website functioning correctly and to provide you with personalized advertising. When you click on OK, you give permission to place all these cookies. If you prefer not to have marketing cookies, you can simply close this message.